A Plan is a Memory of the Future

In his book Deep Survival Laurence Gonzales states that a plan is simply a memory of the future. That makes a lot of sense to me. We visualize what we want to happen and go about making that memory come true. That simple description of a plan is one of a number of concepts from Gonzales in our “Leadership is an Adventure” workshop.

Gonzales goes on to elaborate that sometimes people find themselves in trouble in the outdoors when they are not flexible enough to adjust their plans when the situation changes. He gives the example of two rock climbers who died in a lightning storm, because they weren’t willing to quit their route, even though they saw bad weather coming and knew they shouldn’t be on the route late in the day.

This idea came to mind last week on what was supposed to be an 8-10 hour training day on a groomed multi-use trail in northeastern Minnesota. I planned to go about 30 miles and end up in a small town called Tower, where I would change, order some food and wait for my ride.

The temperatures were cold: -16 degrees F, with a windchill of about -31, but that was part of the reason for leaving so early. The Arrowhead race for which I am training takes place during what is traditionally one of the coldest weeks of the year in Minnesota. One year when I volunteered the actual air temperature reached about -41 degrees F. 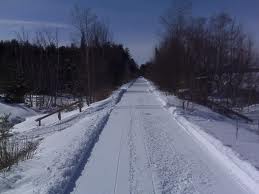 And it did for about 2 miles, then the snowmobile that had been on it turned around. For the remaining seven hours it looked like this. 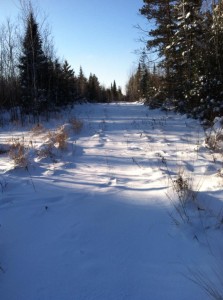 Until I went past. Then it looked like this. 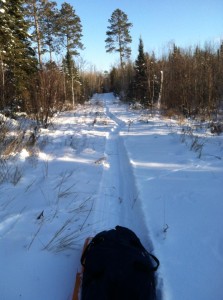 Of course this had a really significant impact on travel speed. I had expected to be traveling 3-4 mph, and ultimately was reduced to less than 2 mph. Had I stuck with my initial plan, I would have most likely been on the trail for 16-17 hours. I had enough food, fuel and clothing to complete the plan. I could have pushed on and just sucked it up and slogged on.

But I chose not to. Not because it was going to be tough, but because it was counter to my training goals. Part of the reason I chose the route I did was that there was a good bail out point about halfway. Fortunately, modern technology worked and I was able to text my ride about the change in plans and wait there until pick up.

Time to Adapt
How many times have you as a leader “stuck to the plan” even though significant factors changed? Why did you not adapt? Was it your memory of the future that forced you to continue down the same path? Was it your confidence based on previous experience? Was it feeling pressure from your constituents?

Could you have done something differently, that still allowed you to be successful, or “come back to fight another day?” We all have had times when we should have changed the plan significantly, or even bailed out completely,but we pushed ahead and suffered the consequences.

Changing the plan does not mean giving up when things get tough. There are times when, as leaders we just need to refocus our energy and push through the challenging task at hand. But, sometimes we need to take a moment, gather feedback from those around us and adjust our plan. The challenge that we each have to figure out is knowing when to push ahead and when to adapt because success can rely as much on that decision as any we make in our planning process.

2
In reply to Eric Chandler
Wednesday, December 23rd, 2020 at 5:13am
@ShmoF16 One of my all-time favorite books.
View on Twitter
1
In reply to Eric Chandler
Thursday, December 17th, 2020 at 5:12am
@ShmoF16 @lineofadvance I ordered it today from our local bookstore!
View on Twitter
2
In reply to 🌻US 🇺🇸 still stands with Ukraine 🇺🇦 🌻
Sunday, November 1st, 2020 at 11:06am
@NicoleVCook @Surgeon_General Once your six year old is a teenager you may understand. We’ve had similar tough conversations with our teenage kids throughout this pandemic. It’s an unending onslaught. Thanks for leading @Surgeon_General and sharing reality.
View on Twitter
3
In reply to Bryan Hansel
Thursday, October 29th, 2020 at 6:02am
@bryanhansel We got 4-5 in Ely. Headed skiing as soon as I get done with the driveway.
View on Twitter
1