Cohesive Teams: Holding One Another Accountable

Last week I was doing a workshop on building effective teams.  The attendees were from a variety of fields and different sized companies and organizations.  They all had a good understanding of management and what they wanted to get out of the workshop. 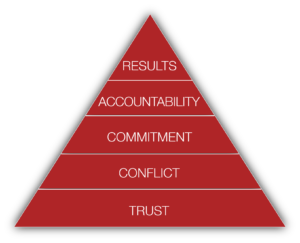 I introduced some of the materials from The Five Behaviors of a Cohesive Team™, based on Patrick Lencioni’s work.  Specifically, the visual model of the behaviors that lead to more cohesive teams.

People understood and bought into the concepts individually, but a couple of managers pushed back on actually implementing change with getting members of teams to hold one another accountable.  An aside–as a trainer I love when people honestly engage in workshops and speak up if something doesn’t ring true, or doesn’t sound feasible in their situation.  I always learn something, and sometimes I can help them address a specific challenge that will make a difference in their organization.

The one manager’s concerns went something like this:  If employees hold one another accountable, what role is left for the manager? Also, if they feel like they can address issues directly, without a supervisor involved, won’t that lead to more interpersonal conflict, rather than less.

I believe he wasn’t the only one in the room with these thoughts, and I am really glad he spoke up.  I also understand where he’s coming from.

If they hold one another accountable, what’s my role?
Managers are asked to do so much:  train, evaluate, supervise, communicate policy and strategy, deal with conflict, lead meetings…and oh, produce their own work. But great managers know that they live and die by the things that aren’t specifically written in their job duties: Building a strong team, insuring people know that they are valued,  and being a coach, mentor, sounding board or just someone who is safe to vent to.

So in dealing with accountability, if individual team members are empowered and have the skills necessary to give one another meaningful feedback about performance that is one less thing–and generally an unpopular thing–that the manager has to spend his/her time on.  The role of holding people accountable will never go away entirely, but when teams are doing it well, the manager can focus on thinking strategically, developing individuals and dealing with unexpected developments.

As you can see in the Five Behaviors model, for co-workers to be comfortable holding one another accountable there has to be a high level of trust, and they have to be comfortable engaging in a certain amount of conflict.  This is where a manager’s work should be focused.  We all inherently know that trust matters when building cohesive teams, but what are you doing every day to build trust (or break it)? Are you creating a team culture than engenders trust and are you teaching the skills and developing the expectations that encourage sharing feedback and holding one another accountable.  When was the last time you listened to critical feedback about yourself from someone you supervise?

If they hold one another accountable, will conflict increase?
Maybe.  If not managed correctly, yes.  But, this is where you come in.  In a survey conducted by the Table Group, 89% of respondents said their team would be more effective if people were better at holding one another accountable.By creating the culture of shared accountability and consistently communicating and reinforcing expectations, you will actually decrease the amount of interpersonal conflict while increasing performance and job satisfaction.

There will of course be those people who go a little overboard and need to be coached on when, where and how to hold their co-workers accountable.  You will also most likely spend some time teaching people how to receive feedback from colleagues, or maybe listening when someone doesn’t take feedback well.  Again, getting your team to do this isn’t easy, but when you see it in action, you will have no doubt of its positive impact on performance.

Won’t this take a lot of my time?
Yes.  But, managing people always takes time.  It’s how one chooses to spend their time that separates mediocre managers from good managers.  Will you spend your time building a team of people who trust one another, and are committed to shared results enough that they hold one another accountable?  Or, will you spend your time making sure individual contributors are doing quality work and listening to co-workers complain about one another and what is or isn’t getting done well?

Jerritt Johnston is the owner of True North Consultants, in northern Minnesota.  He specializes in leadership and management training that helps people get the most out of their teams. Contact us today to learn more about how The Five Behaviors of a Cohesive Team can positively impact your organization.

Error: (#10) This endpoint requires the 'manage_pages' or 'pages_read_engagement' permission or the 'Page Public Content Access' feature. Refer to https://developers.facebook.com/docs/apps/review/login-permissions#manage-pages and https://developers.facebook.com/docs/apps/review/feature#reference-PAGES_ACCESS for details.
Type: OAuthException
Code: 10