In April of 2009 John and his expedition partner, Tyler Fish, became the first and only Americans to travel “unsupported” from land to the North Pole. This 55-day, 475-mile journey has been accomplished by only 13 expeditions and has been called the “toughest expedition on the planet.” To travel unsupported means to travel under one’s own power without resupply. An unsupported expedition embodies the ethos of preparation, simplicity, self-reliance, and accountability—themes that John highlights in his motivational lectures.

A couple of years back I had a chance to cross-country ski with John and Tyler. We had a great day of skiing in the at the edge of the Boundary Waters Canoe Area Wilderness near Ely.While talking after the ski, we all realized that we share some common thoughts about the role of adventure in life and what it can teach us about ourselves and others. Since then I have learned a lot from both John and Tyler. They are both available to speak at True North Adventures events. You can learn more about John at http://johnhuston.com

This is the first of a two-part interview with John.

What led you to undertake this trip?
In 2005 Rune Gjeldnes, Norwegian polar explorer, mentioned that no Americans had skied to the North Pole unsupported. At the time Rune and I, and 3 teammates, were in the middle of the Greenland ice cap. I’d been attracted to long polar expeditions ever since starting out as a winter instructor at the Voyager Outward Bound School, in Ely, MN, in 2000. The school’s director, Julie Hignell, had dogsledded to the North Pole with Will Steger in 1995. There’s a certain culture in Ely, MN that engenders dreams of big journeys.

How did you go about picking a partner and being confident he would be a good teammate for this incredibly challenging trip?
I’ve always looked up to Tyler. He was one of my mentors at Outward Bound. I admired his integrity. We were on the same ski racing team and I knew he could ski his ass off. He was a natural choice, we have similar values.

There’s an old saying, “Not preparing, is preparing to fail.” How did you train physically and prepare for all the other challenges of this trip both individually and as a team?
We like to say the “Preparation is the expedition.” Physically training involved pulling tires to simulate pulling heavy sled loads and a lot of core strengthening. The whole project felt incredibly daunting at times. Physical training gave us a feeling that we were accomplishing something and trained our minds for the pace of the trip, that was really important. It takes a lot of patience to ski to the North Pole, progress and pace can be vey slow, so it greatly helps to be used to that sort of crawl. We took training very seriously.

If you could offer any advice for a team getting ready for a major undertaking, whether in the world of adventure, or in the world of work, what would it be? How can they learn from your successful preparation or the challenges you faced getting ready?
Set goals and fully commit to the all aspects of the journey to achieve those goals. Challenges are inherently difficult, expect it and embrace it, there will be highs and lows, interpersonal conflicts, and unexpected occurrences…you may have to change in order to succeed. Acknowledging these aspects from the get go is essential.

Once you got on the ice, did the experience line up with your expectations or were there significant surprises?
The main surprise was that Tyler and I weren’t getting along as well as could have been. We functioned as a team well and looked out for each other, but decision making was laborious and tense sometimes. We should’ve had more regular check-ins to take care of interpersonal issues that had developed during the stressful preparation phase. We ended up airing it all out later on in the trip, doing so likely saved the expedition. When you are caught in a busy river of stress, it can be really hard to dedicate time to the interpersonal side of things, but it’s so important. Communication, trust, and rapport take a lot of work, but that is the foundation of any successful team. 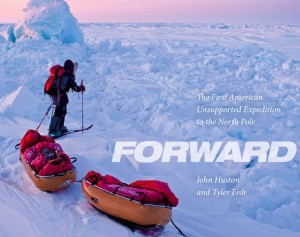 You wrote in your book Forward, that routine was important to your success. Why was that so important?
Routines are the engine and safety net of an expedition. Well thought out routines keep you from worrying about and spending time pondering what to do next. Einstein wore the same type of suit everyday, he had more important things to think about. It’s the same for us, we structure everyday and many aspects of the trip so that there was a lot of repetition. Every travel day was structured the same, a series of 120 and 90 minute ski sessions, with 15 minute breaks for snacking and hydration…we just kept connecting the dots and moving forward. Every time we set up camp we did it the same way, so if there was a storm or if we were exhausted we had it down pat. The times when we didn’t follow our routines sometimes resulted in big mistakes, like me falling through the ice, I rushed through the ice testing routine and we paid for it.

#100 - This Page may not be public. Here are some possible solutions to fix the error.